Even though it was a Bank holiday I didn't get as much done as I wanted too on this job.

Saturday was a write off as I had to do my company tax. I did figure out a good way to remove the resin from the Ali tube though. Got one of my old blade razors and modified it a bit - the blades are quite soft and so don't scratch the metal at all. Worked a treat. The tube is all clean now and I've put two coats of release wax on it - so it shouldn't be a problem again.

Sunday was a nice day - so I had the garage door open and worked on the rudder hinge install. A bit of a scary job this one, lots of things have to line up.

With the integrated tailwheel there is an added complication as there is another rib at the bottom. I decided to do a 'dry run' by getting everything together in the right order to see how it all works before actually bonding or supergluing anything.

Before that though I did fit the top hinge to the tail. This was done with superglue to start with - just as well - as you will see from the below photo the pin in the rudder is off centre - by about 1mm. Actually the pin seems to be centred on the rudder seam, but the rudder itself is wider on one side than the other. This made it 'catch' a little on the fin when installed. I moved the hinge 1mm and this has helped a lot but as you will see from the below photo the fin goes in at one corner (other side is perfect) so this will have to be fixed. I intend to do this by putting several layers of carbon on the outside to build it up to the right shape. Then after that is set I will file off from the inside to give a good clearance. This carbon will need blending in with the rest of the fin - which will be done with body filler later on.

I figured out a good way to get everything lining up. One of the elevator pushrod tubes is just perfect for the job. Screw in a rod end at the narrow end and this allows it to hang from the top hinge. Get the fuselage levelled up and the elevator tube hangs straight down. The fatter part of which is only about 2mm narrower than the tailwheel tube. So it makes it easy to get it all lined up just perfect.

By doing all this it became obvious that the first important rib is the middle one - as this determines where the rudder connects onto the hinge pins. So get this one in the right place first - the other two ribs will be relative to that. (this will be the lower of the two ribs if you have the conventional tailwheel).

There are two further ribs that are missing from my kit - these are needed for the integrated tailwheel - one acts as a mud guard inside the rudder and the other more critical one makes the tail assume the right shape so that the tailwheel rotates freely and the rudder goes inside the tail. At the moment the rudder wants to go outside of the tail. I think I will contact the factory about this as I don't have any carbon spare to make up my own. Plus I'm not sure of the shape for the one that goes inside the tail.

I'll be at Sywell next weekend as it's our annual LAA Rally - hopefully some Twisters will be there this time! 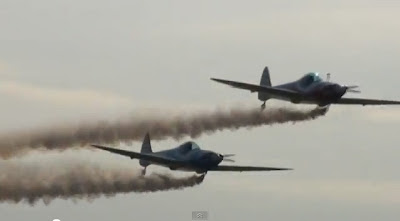 On Sunday I went to Kemble airfield in Gloucestershire. (now renamed as the Cotswolds Airport).

It was for a Formation Flying course with Ultimate High - a company set up by ex RAF jet jocks (most of them ex Red Arrows).

The course was brilliant fun - we had theory in the morning - then a briefing and finally flying in the afternoon. A 40min sortie with a two ship Bulldog formation.

The Bulldog is a surprisingly nice aircraft - for a trainer - I was expected it to be like a Cessna or Piper but it is lovely on the controls and has great visibility from the bubble canopy.

I flew lead for the first half then switched to wing. What great fun. We tried echelon left and right and then line astern, plus a break away and rejoin. Then into tail chase for a couple of wingovers and barrel rolls. Finally heading back to the airfield for a run in and break.

Highly recommended if you've never done it - formation flying is a great challenge and a great buzz when you get it right.

Later in the day I decided that I just had to have a go in their Extra 300 as well.

This was a 35min sortie and what a beast the Extra is!

I flew it for about half of the sortie - it is extremely sensitive on the controls - a very light touch is needed. The roll rate is something else!

We did a few basic maneuvers - loop, roll, cubans, vertical roll etc. then Mark demoed an accelerated flat spin, followed by an inverted flat spin - never done one of those before!

Towards the end of the sortie I got 'Greeners' (Mark Greenfield) to demo some tumbling maneuvers  as I hadn't done anything like that before. They are pretty disorientating. I liked the Roulade best. A double forward tumble from a knife edge. The 'cravat' is also good - maybe I can try one in the Twister when it's done.

Finally Greeners headed back to the airfield and did an impromptu display for about 5 mins - really throwing it around!

On landing the visibility forward is awful - so a curving approach is best.

All in all a great day out.

I've cocked up the weeks in the titles somehow so I'm leaving that out of the title until we are actually on Week 54.

Had a bit of a scary moment on the weekend when I went to remove the ali tube that goes through the tail tunnel - it wouldn't budge!

I finally got it to move with a wooden block and a few hefty whacks with the rubber mallet.

The problem is that the fiberglass tube tunnel inside the fin was porous in certain places - partly my fault for not checking this - so the flock and resin from the reinforcing had seeped through and onto the ali tube.

Also there was quite a bit of overspray from the gel coating which got melted by the resin and stuck to the tube.

Obviously I cannot use anything metal to remove all this mess - as it will scratch the tube. So far my fingernail seems to be the best thing to get it off. This will take several hours to put right.

I cleaned the inside of the tail tube with acetone and this has removed all the gel coat overspray.

I will also add a few layers of mould release wax to the ail tube before I put it back in. If I could do the job again I would check the inside first and also wax the tube before attempting this part of the job.

The other photos are of some urethane blocks that I ordered which will be used to carve the plugs for the oil cooler scoop, inlet and outlet ducts. They have been cut in half and stuck on top of one another to get the right shape to begin with. This is done using slightly runny micro balloons (and lots of weight on top). This will be a moldless construction - that is the plug is layed up on directly and then the foam is removed after the fiberglass has set (thereby destroying the plug).

Final pic is of the long awaited inlet rings for the cowling.

They are indeed things of beauty, having been machined out of a solid piece of aluminium.

Not cheap as you can imagine. 90 USD each and then I had to pay for shipping from the USA and VAT when they got here.

I bought them from James Aircraft who make aftermarket cowlings for the Vans series of kits.

I made a video of the Air Tattoo airshow I went to recently - not my best bit of filming or editing but plenty of plane noise and good displays. 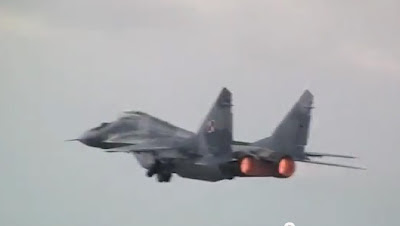 Well Saturday was indeed a nice day so for the first time I opened up the garage door and worked on the inside of the tail.

This job involves bonding in 2 ribs that join the sides of the fin with the tailplane spar tube.

The edges of the spar tube need flock in the gaps - I used a lot of flock here and actually ran out - so was unable to do the second rib.

Lots of faffing about trimming the ribs so they fit square and perfectly in the middle - hours went by just doing this!

I've got some more flock on order so hopefully I'll have this job done later next week - in the meantime I will put body filler in the gaps on the fuse reinforcing I have done so far. And maybe fit the brakes to the axles if I'm in the mood.

Say hi to Johan from Belgium.

He came over last weekend and did a training day with me.

Reinforcing the joints on a test piece I made. It turned out very good.

I think he will order a kit soon!

Finally got the gear aligned to my satisfaction - as you will see from the below photos they are both exactly 0.25 degrees toe out - perfect!

While on the subject of gear I thought I would let you know that I found one of the gear leg holes made for the axle to be too big on one side of the hole. This allowed for a little play and I was not at all happy about this, even though the axle gets bolted to the gear leg, that little play was unacceptable to me.

So how to fix it?

I had a scrap piece of axle - that is trimmed off (see photo) so the the axle is flush with the edge of the gear leg. So I put 3 layers of mould release wax on this and then flocked in the hole - using this piece of axle to make a perfect fit for the hole. Some flock was pushed in around the edge - you can see from one photo below that quite a bit was needed - it is the lighter coloured material just on the edge of the hole.

When it was all cured I was a touch nervous that the axle would not come out - but it came out easily with a few gentle taps with a socket of the right size and rubber mallet.

The axle now fits perfectly - no play at all.

This week I've started on reinforcing the fuselage seams - just done the top so far.

On the weekend I hope to start on the inside of the fin - there are two carbon sandwich brackets that need bonding in there - to do this job I will need to have the garage door open - so I hope it is a nice day.

Getting in on the display act

I see Adrian Hatton in his fixed gear Twister is doing displays now too.

Link to his site here:

I know Adrian as he used to do the CofA on our glider. 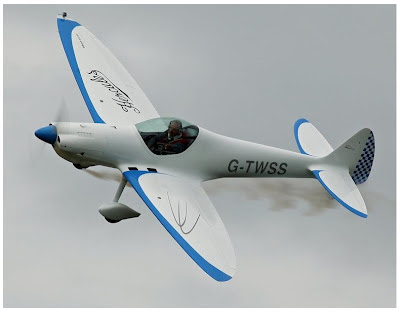